IzanagiGames, Inc. (located in Koto-ku, Tokyo, Japan, and led by CEO/Producer Shinsuke Umeda) has announced a giveaway to win a Death Come True script autographed by all the cast: Kanata Hongo, Chiaki Kuriyama, Yuki Kaji, Win Morisaki, Chihiro Yamamoto and Jiro Sato, as well as by the scenario writer/ director Kazutaka Kodaka. The giveaway will start on the official IzanagiGames Twitter account to celebrate pre-orders opening for the Death Come True PlayStation®4 physical edition. Death Come True is a new FMV game written and directed by Kazutaka Kodaka, creator of the Danganronpa series.​ 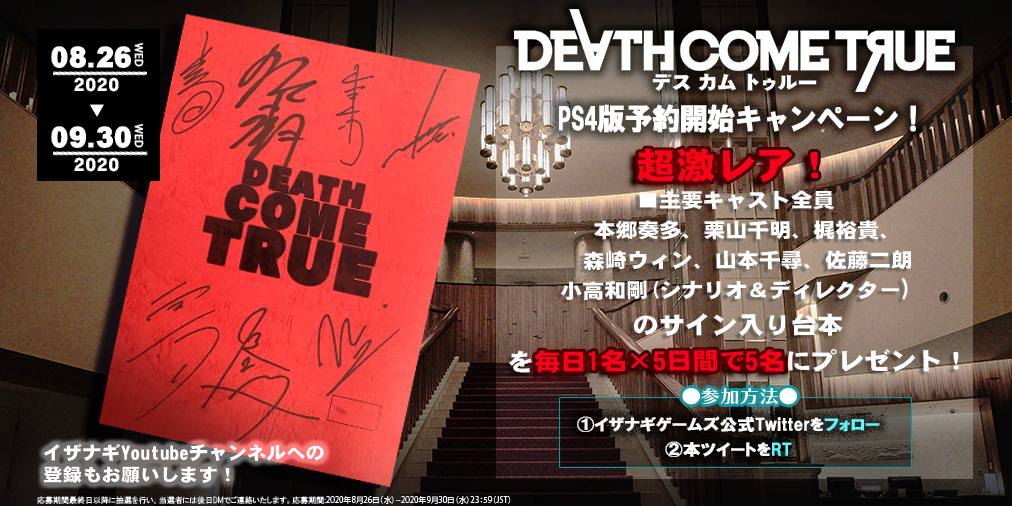 Simply follow the official IzanagiGames Twitter account (＠izanagigames) and retweet the corresponding tweet. One winner per day will be selected for 5 consecutive days, and a total of 5 winners will receive an exclusive Death Come True film script autographed by all the cast and Kazutaka Kodaka. We look forward to everyone’s participation!

A Death Come True script autographed by the whole cast and Kazutaka Kodaka:

There will be a total of 5 winners.

Scheduled release date for the PlayStation®4 physical edition – October 15, 2020 (Digital edition will also be released on the same day)

*Please be aware that there are a limited number of copies of the Special Blu-ray Disc™ available.

・“PlayStation,” and “PS4,” are trademarks or registered trademarks of Sony Interactive Entertainment Inc.

・Blu-ray Disc™ and Blu-ray™ are trademarks of the Blu-ray Disc Association.